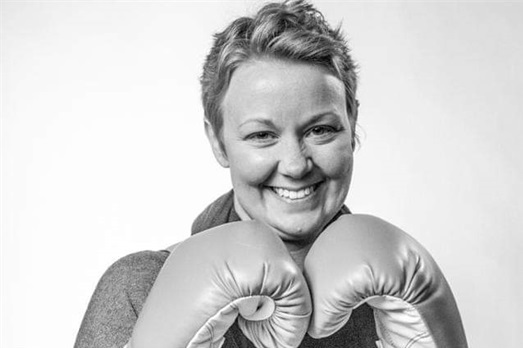 So, as I think about family, friends and colleagues - there seems to be an infinite list of those that inspire me.  With October being Breast Cancer Awareness month, it only seems fitting that I share with you Abby’s journey.  Abby inspires me.  She is my stepdaughter.  She is beautiful.  She is strong.  Stronger than I ever thought possible.

As a twice blended family, on both sides - both Darren and I had been widowed our second time around, our respective biological kids from our first marriages have had many changing family dynamics.  I met Abby when she was in college - an only child - the apple of her father’s eye.  Abby was a girl who knew what she wanted, and when she wanted it.  She was a hard worker, and determined.

So, as we navigated her “launch into adulthood”, we were shocked to find out that she was quitting her job, taking a pay cut (!) and was moving back to the area - to explore a relationship with Chad - a young man that she wasn’t permitted to date in high school because he was a few years older than her.  Way too old, according to her protective father.  And they found their way back to each other.

Abby and Chad fared well, decided to have a child (like many young people do these days) and maybe someday get married.  So along comes little Paige, blond-beautiful-strong, from the day she was born.  Just like her mother.  And Abby was born to be a mother.  She and Chad - from day one - are awesome parents.  Paige is their world.  She is funny, confident and so very fortunate - for they don’t have much in the material sense - but are beyond blessed in the family sense.

So, Abby and Chad decide to get married.  A beautiful wedding and a beautiful bride.

And then the news….

Shortly after their wedding, Abby felt a lump in her left breast.  Showed her Aunt Linda, a nurse, who said she should contact her doctor right away.  At the doctors, before tests were even done, the lump was suspicious enough to put everyone on high alert.  They scheduled a biopsy for the very next day ( unheard of, right?) and the diagnosis was quick.  Stage 3, HER2 positive breast cancer.  Less than 60 days after her beautiful wedding.

We were all so scared for Abby.  And Chad.  And Paige.  They were so happy just a few weeks before and now this.

Abby put her plan together - scheduled work so that she could take a few days off each week she got chemo.  Get her hair cut - so when it fell out, it wasn’t so drastic. No sitters for Paige whenever possible.  Abby wanted every minute with her.  And she never complained - even when you could tell she was tired or not feeling well.  She was determined to beat this.

Abby not only had the scars of breast removal, but lost 13 lymph nodes on her left side.  The doctors did an amazing job with reconstruction and Abby works hard to live her best life.  And today, she is a survivor - 5 years in - prognosis is good!

She and her mother ( also a breast cancer survivor) along with Paige, work very hard to raise awareness - speak at events - organize fundraisers - and have done so every year since her diagnosis.

Abby also started to work on getting back in shape. She gained some weight during treatment as they needed belly fat for reconstruction.  So, she planned her diet - and fitness regimen.  Crossfit!!  Are you kidding?  How was Abby - with all of this scar tissue - going to lift heavy weights??!  And why would she want to?

Well, The gym she goes to had some modified workouts that she could build up to whatever her body could handle.  2 years later she is still doing it - and found a way to raise money for breast cancer awareness.  Barbells for boobs!  She is reaching her fitness goals, one step at a time.  She is reaching her life goals, one day at a time.  All the while, paying it forward, one fundraiser, speech or event at a time.

Inspired?  Completely.  In awe?  Yes.  Of this young woman who has found a way to turn adversity into purpose, whom I am fortunate to have in my life and call family.